Airborne Mold: Overlooked, Toxic, and on the Rise

When Benjamin Bryce, a dorm advisor at Vanderbilt University, developed a sore throat and shortness of breath, he did what most of us would do these days; he took a covid test. But Bryce tested negative and, more curiously, noticed his symptoms vanished when he slept off campus. "I could breathe easier, and my sore throat went away," he told a Nashville TV station. Back in his dorm, Bryce discovered black spots surrounding pipes and sent samples to a lab. Testing identified the culprit: mold, a health menace on the rise in college dorm rooms, K-12 classrooms, hotels, and other built environments. 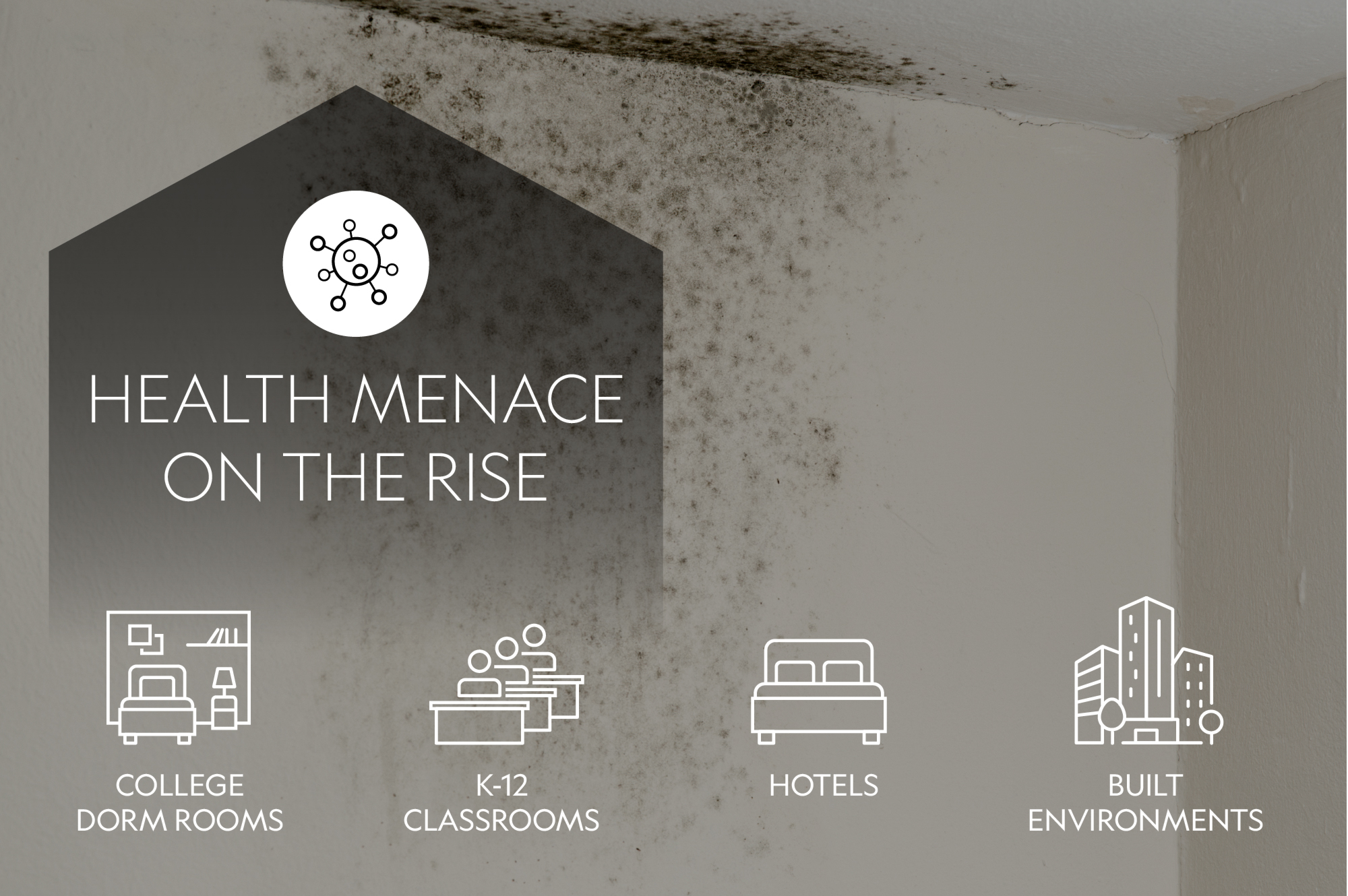 In the covid era, indoor air quality has become an urgent global concern, but SARS-CoV-2 has overshadowed other airborne threats, particularly mold. As the planet becomes hotter and wetter, mold becomes a more persistent headache for schools and commercial buildings, eating up operational budgets and generating negative publicity.

The risks are becoming even more widespread as extreme weather events — snowstorms, heavy rainfall, hurricanes — strike more often. When ice dams melt, water drips into buildings, and when flood waters recede, mold sprouts from sludge; scenarios are too often overlooked. "The importance of climate change on indoor and outdoor mold has received little attention," an international team noted in the European Journal of Allergy and Clinical Immunology.

In nature, mold — microscopic fungi — plays an important role in accelerating the decomposition of fallen leaves, dead trees, and other organic material. Under hospitable conditions, mold can grow on and within all building surfaces: carpet padding, drywall, wood products, ceiling tiles, insulation, wallpaper, and linoleum. Indoors, however, mold growth is nothing but trouble. 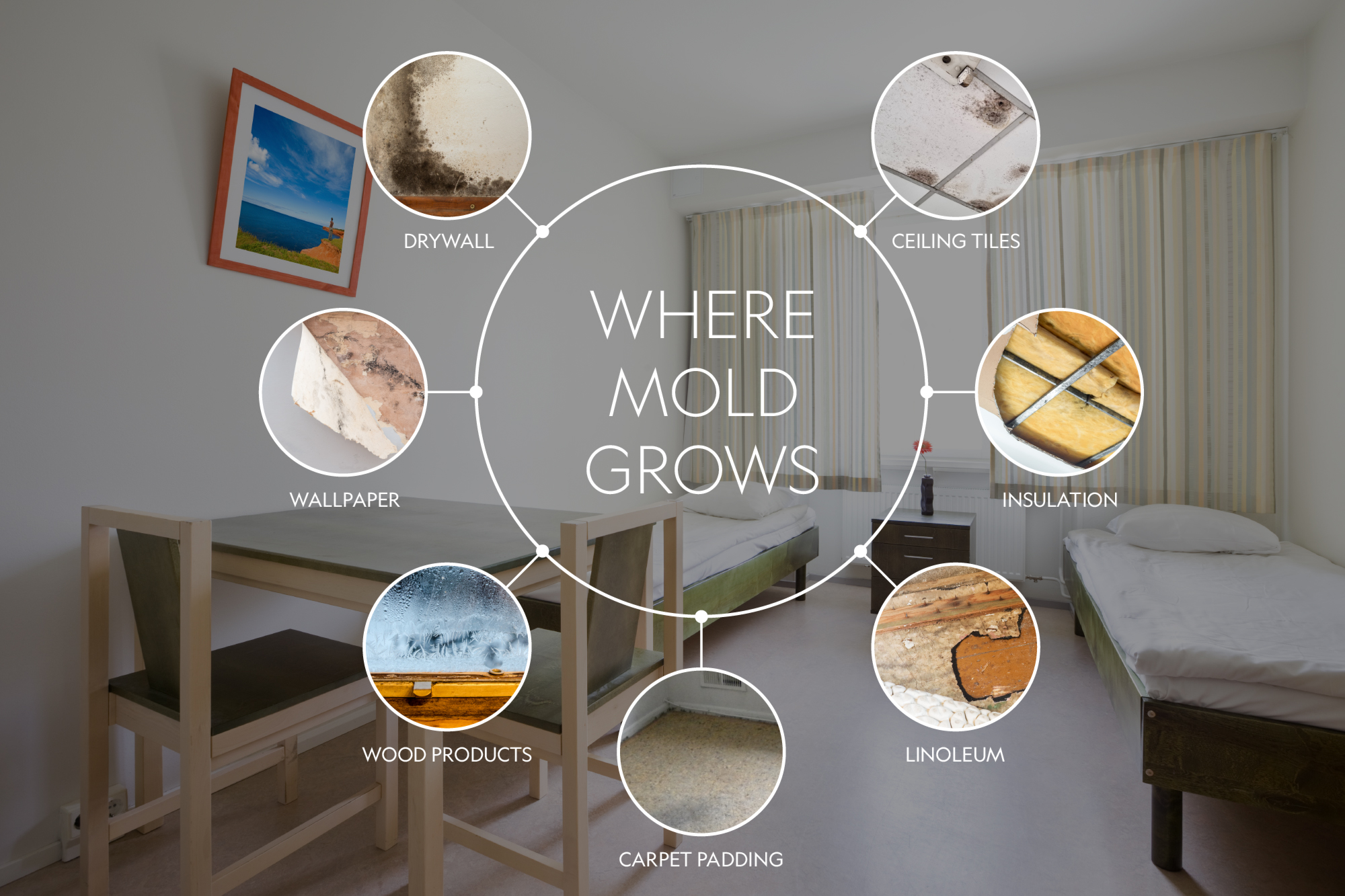 Mold reproduces by releasing microscopic spores into the air. A spore that lands on a moist surface can quickly sprout roots and generate a colony, spreading through cracks and behind baseboards. Damp corners, crawl spaces, vents, and the walls along leaking pipes — are all conducive to mold growth.

Though aging, rundown buildings tend to invite excess moisture, mold growth can occur even in newer, well-managed buildings. When physicians sampled the air in 180 classrooms at 12 Boston schools, mold was detected in every room. "School-age did not correlate with total mold," the doctors reported.

Each mold species has its favored environment. Yellow-green Aspergillus grows in thick layers on walls, while Penicillium, with its velvety texture and bluish-green color, propagates on ceiling tiles and wood surfaces. Cladosporium, the olive-green, suede-like mold that commonly permeates carpets, grows at virtually any temperature, even in cold storage. Aureobasidium, a pinkish-brown variety, breeds on wooden surfaces, while Stachybotrys, the slimy stuff known as "toxic black mold," infests drywall, wallpaper, and insulation backing. 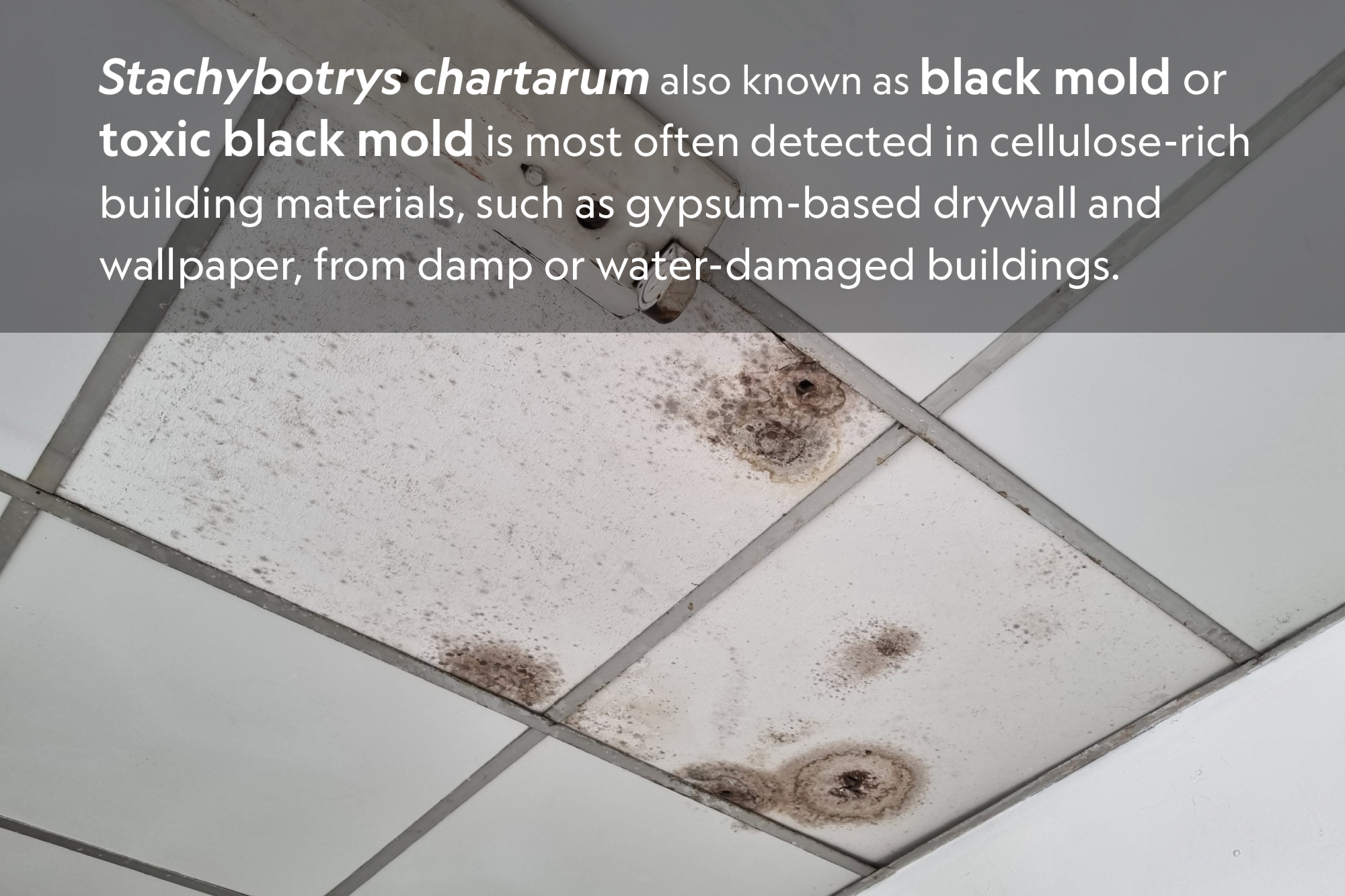 While mold, in all its forms, is disconcerting to look at, especially in a hotel room or college dorm, it is the fungi's lightweight, invisible spores that wreak havoc on human health. Airborne mold can trigger various symptoms, from the uncomfortable to the miserable to the dangerous. Exposure can trigger an immediate reaction, or its effects can surface days later.

Given that the typical human draws 22,000 breaths a day and that mold particles can remain trapped for months within building walls, there's ample opportunity for human airways to be affected. "Mold exposure can irritate the eyes, skin, nose, throat, and lungs of mold-allergic and non-allergic people," confirms the U.S. Environmental Protection Agency.

Among those with mold allergies, some 10% of the population, the immune system can overreact to either intense or prolonged mold exposure, perceiving mold spores as foreign invaders and producing allergy-causing antibodies to fight them. The upshot: coughing, sneezing, itchy and red eyes, runny nose, fatigue, chest tightness, and shortness of breath.

Research also indicates mold exposure can promote the development of asthma and wheezing in previously healthy children. In people with asthma, mold exposure can trigger a full-blown asthma attack. In patients with compromised immune systems or respiratory function, such as chronic obstructive pulmonary disease (COPD), mold spores can cause severe inflammation of the lungs. When combined with airborne viruses or bacteria, mold spores can trigger pneumonia and other respiratory infections.

Mold colonies, often hidden behind walls or dark corners, can go undetected for long periods. Often, the first indication is that rank, rotten-wood odor. But by then, occupants — students, teachers, dorm residents — may have been exposed for months. Though exposed for relatively short periods, hotel guests can be afflicted by high spore concentrations.

Though mold often originates indoors, spores can be transported into buildings from the outdoors via open doorways, windows, vents, and heating and air conditioning systems. Spores can attach to clothing, shoes, and even pets.

The World Health Organization report indicates that no acceptable level of airborne mold has been identified. Instead, the WHO recommends that "dampness and mold-related problems be prevented."

How? Given the minuscule size of some mold spores, HEPA filtration alone may not suffice. The smallest spores can slip through the filters, recirculating in the air and taking root when conditions become sufficiently damp. The most effective action is to destroy mold spores in the air before the particles can settle on surfaces and sprout new colonies. This can be achieved via air purification and disinfection, such as with WellAir's Plasma Air in-duct bipolar ionization solutions, which purify the air in a room or throughout an entire building.

The Plasma Air products help reduce airborne mold spores by producing millions of oxygen ions circulated throughout the building's ductwork system. These positively and negatively charged ions cluster around mold spores, effectively rendering them inactive so they can no longer grow.

Another option is WellAir's portable medical-grade solutions, which disinfect the air in the breathing zone of a particular space using patented NanoStrikeTM technology. This technology can safely destroy mold spores within nanoseconds, providing no ability for the spores to reproduce on surfaces. 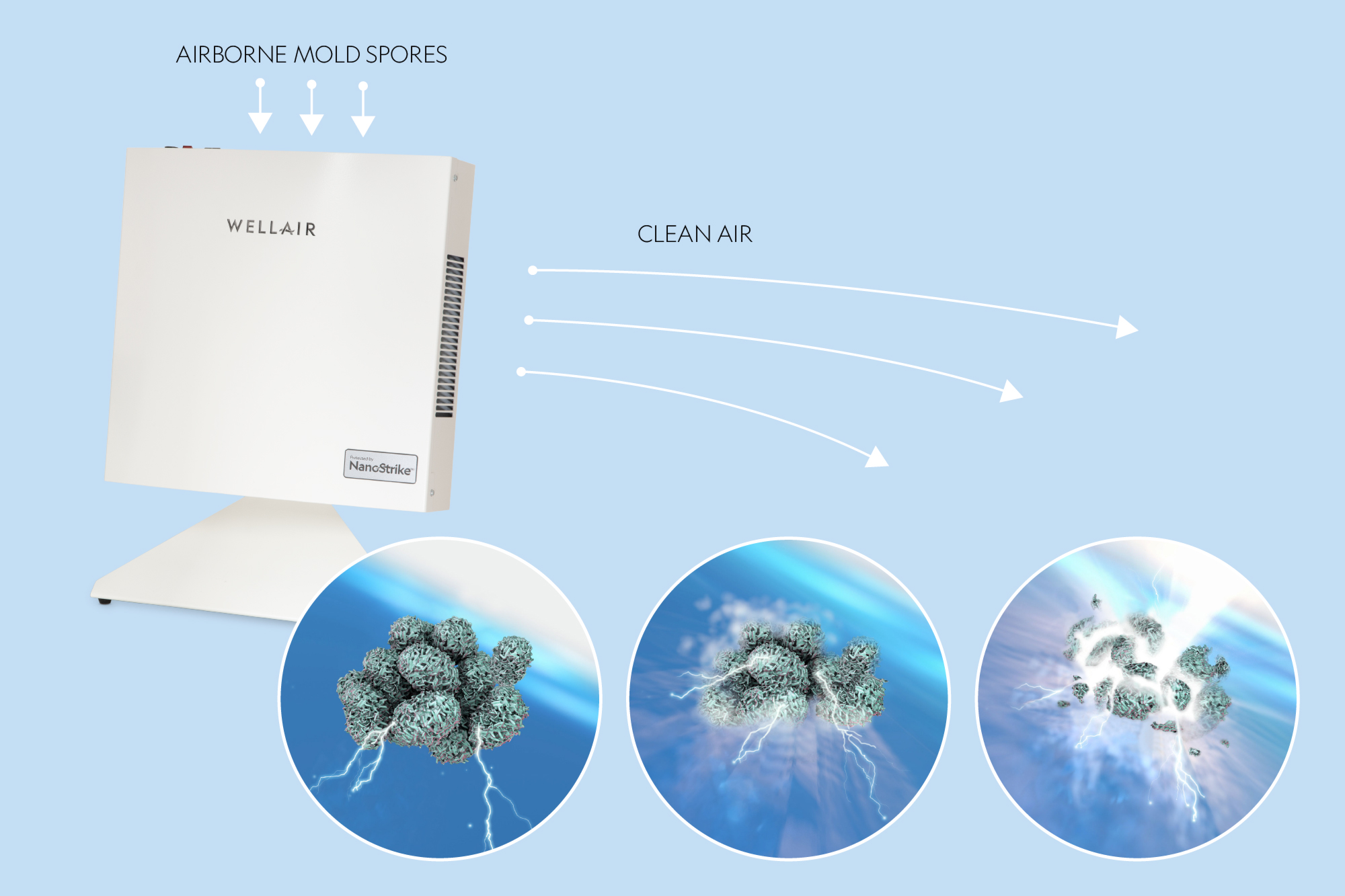 Air purification and disinfection offer an actual combatant to this omnipresent and ever-growing threat. The additional protection of WellAir technology and solutions can help prevent mold-induced health episodes, as well as the TikTok tags, media reports, and potential lawsuits they can trigger.